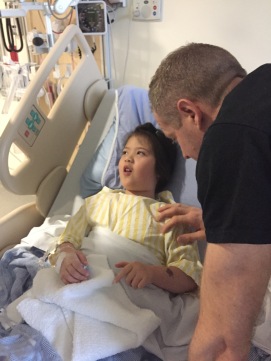 Well after months of knowing something wasn’t quite right and holding our breathe it happened.  Naya woke up unwell, saying her shunt hurt and then vomiting.

Since September when we realized fluid was building up around her shunt valve we have been expecting another surgery.  Days turned into weeks…and weeks turned into months.  People kept asking how she is doing and I kept saying she is doing good!

Couple weeks ago I noticed there was a A LOT of fluid around her valve and she said it hurt when I tried to do her hair.  I started to panic.  Christmas was coming.  We were having guests come stay with us….we were having a huge party with ham, and turkey and 2 beautiful snowflake cakes!!!  Just our luck I thought….it’s going to happen.  But I kept hoping…as long as it didn’t happen on Dec 25 it was ok.  And we made it!!  Just barely…

Surgery went well.  The catheter in her brain was blocked.  So Neurosurgeons Dr. McDonald and fellow Dr. Goodluck decided to move it.  They kept the valve behind her right ear, but instead of having the catheter and tube run horizontal, they ran the tube up vertically having it come out of her skull at the top of her hairline and then down to the valve.  Thank goodness Naya has thick beautiful hair.

View all posts by Carm CE