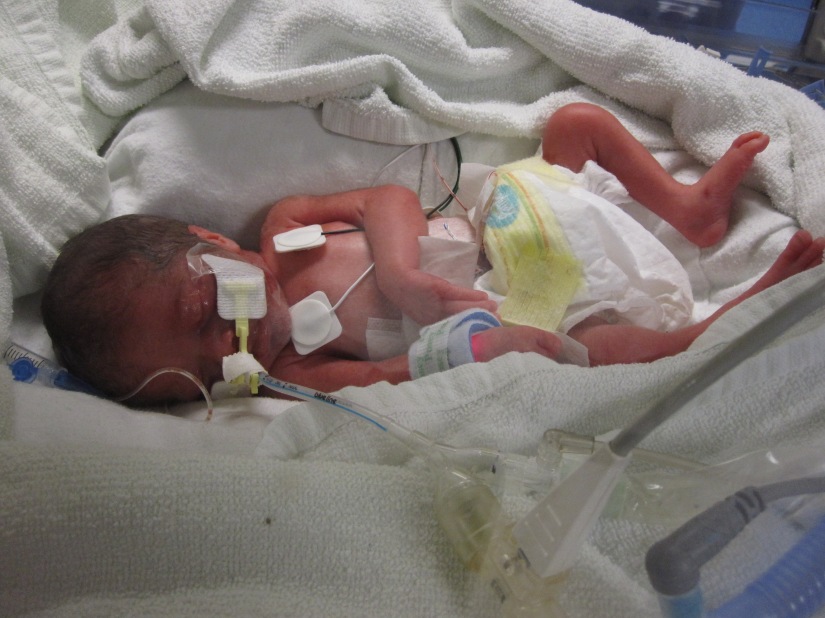 It was Jan 7th, I was at home watching Indiana Jones & the Last Crusade with Adrian. We had gone to our first prenatal class earlier that day.  And I had stomache pain on and off all day but it never dawned on me that I was in early labour.

After the movie was over, I called our OB and told him I was having spotting and stomache pain. He said to come in to get it check out. Just in case. So at 11pm we drove downtown to the Hosptial.

After examination, we were told I was 4cm dialated. I was in labour and I needed to be transferred to BC Women’s Hopsital ASAP.  I had no idea at that point in time what a roller coaster of a ride we were in for.

Her Apgar scores were 0s and 1s. She was not well. After a quick cuddle, the doctors took her away… and I didn’t know it at the time, but they took a her away to resuscitate her….she wasn’t breathing.

Naya’s first home was an incubator. She needed a ventilator. She was septic and was put on many different antibiotics and medications. First 24 hours were so hard, she almost didn’t make it. She was a fighter right from birth. Born a fighter…born a super hero.

Her first surgery was at 9 days of life – a heart PDA ligation to fix a heart defect. Due to prematurity, her blood vessels in her brain were weak and she also developed a brain bleed. The bleed cause a clot and then Hydrocephalus. She was shunted on Jan 30th, her 2nd surgery in less than 2 weeks.

Everyday in the NICU brought something new.  We were learning to be first time parents – changing diapers, pumping breast milk, bottle feeding.  Learning about all the medical terms and procedures our child was going through – CSF, Hydrocephalus, tapping the shunt, blood transfusion, bradycardia, CPAP, PICC line etc etc.  And we were learning how different our lives now were, not only as parents, but parents of a very sick little girl.